A Night to Surrender Review 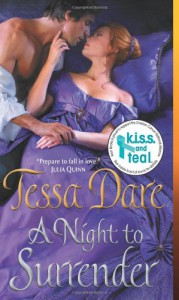 Wow. I looooved this book. Loved it. Tessa Dare's writing is perfection.

Susanna is, essentially, the patroness of Spindle Cove, a small village where ladies come to recuperate, mostly from their underdog status. Susanna is a healer of sorts and has created a safe haven for women to live and rebuild their lives.

Bram is an injured lieutenant colonel and is trying to redeem himself in order to return to the battlefield. He is charged with assembling and training a militia in the mostly ladies-run enclave of Spindle Cove. A challenging, if not, hopeless task.

It's a story of a clash of wills, but only in the best way. It was romantic, tender, funny, and charming. Bram falls for Susanna (who has always felt awkward) and loves the things about her that make her unique. She doesn't need him to do that, or for a sense of identity, but it showed how he appreciated the woman she is.

Susanna turns her healing skills on him as well. I thought these scenes were subtle and great. One, where she helps him rehab his knee using a manacled ball and chain was a great metaphor for his old desire to attain an identity his father would approve of. I never got the sense of "oh, she's fixing him." The way their relationship built was emotional and sweet. They earned each other's trust. They admired each other's strengths. Their secrets and backstory unfolded throughout the book but the focus remained on their growing sense of community and family.

The sexual tension and scenes were also quite impressive and steamy. *cough, "pearl" worked here. I also won't look at willow trees the same.

Susanna was wonderful. The kind of heroine you'd want to be friends with. She's brave, she's looked up to, but she's scared of losing the safe place Spindle Cove has become (for her). I liked Bram too. He's a noble hero-type, but warm-blooded with a sense of humor. He was so drawn to Susanna and I just loved that.

I have been reading this series out of order, but that never really bothers me. It wasn't a problem here either. As the first in the series, there's some set up for future books. I felt that that worked well.

I took my time reading this, possibly because I didn't want it to end. Dare's writing is so beautiful and clever. A Night to Surrender is a fabulous historical romance. Highly recommend.