Barefoot by the Sea Review 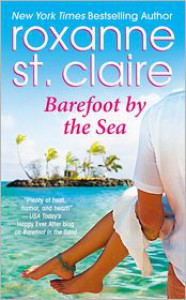 (MAJOR SPOILERS...You have been warned.)

Barefoot by the Sea was a satisfying read in Roxanne St. Claire's Barefoot series. Tessa is an organic farmer with a majorly broken heart and a looong history of infertility. She falls in love with John, an almost-chef in a witness protection program...who has two kids he is trying to get back once he can show he's found stability. So, you know, obstacles.

I really liked it. Ian/John, the hero was awesome and unexpected. Srsly, a guy with a secret British accent that he can only use just for you? Get out of my head, St. Claire!  Um, awesome! :)

Tessa is on a baby-mission and is tired of hiding that fact. There were times she kept going with it and I really felt for her. Her sad, giant bookshelf of infertility in particular. She was surrounded by babies and happy couples. She also had a thing about lying and, in a subtle way, had to accept that sometimes people tell lies to protect people...or for other reasons.

Lacey, Joss, and Zoe made appearances and were the same wonderfully supportive friends. I have loved that about the series.

The Ashley subplot worked but Ashley continued to be irritating. I also in some ways thought the end was a little rushed, but these two had both been through SO MUCH that how it worked out did not need to be convoluted as well.

I loved the last scene though. Sweet and lovely and it really honored what Tessa was about. I still would have liked her not to have given up on the idea that one can be a single mom and still be a family, but I'm thinking that she was regretting not choosing to be with Ian when she had the chance. She also ended up with not one, but three kids. Aw.

The Epi-blog was hilars. I appreciated the mention of hottie Dr. Oliver. Rawr!