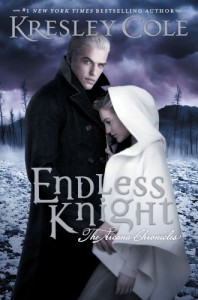 I finished Endless Knight last night and my thoughts are still spinning. The ending had me wound up, but I was expecting something that would amp up the next book. It wasn't exactly a cliff-hanger, more like a nail-biter.

The action in book two is different, namely because Evie knows what she is and has realized her powers. This makes her a completely different heroine, in a good way. It was fun to see her kick some major ass and to see why The Empress is so feared. Gentle, compassionate Evie pulls it off and shows consistency of purpose and that she can relish her powers.

The first half of the book has her forming alliances among Arcana she meets, and working out her relationship with Jackson. Sigh. I don't doubt the Cajun, but Evie does, which is to be expected. He comes around and surprises her, like the scrappy, DEVOTED, dude he has pretty much always been. And it so worked for me. So. Much. J'adore le Cajun.

Evie gets separated from her friends and, other than for a few glimpses through Matthew's eyes, we really don't get to see Jack again. It speaks to how strong of a character he is, that his presence is felt through the rest of the book. Cole makes those few scenes between Evie and Jack at the beginning intense for a reason.

Aaaand, that reason is the enigmatic, haunted, pissy, Death, also named Aric. Most of the focus of the second half is how Death kidnaps Evie, threatening to kill her at any time, while he keeps her locked in his heavily-provisioned castle. Very Beauty and the Beast. As a HUGE FAN of Cole's Immortals After Dark series, I found echoes of Lothaire in Death. And yes, it worked.

There are several ways to look at the dynamic between Aric and Evie. Cole has mentioned in interviews that she drew from the horror genre, and I could definitely see that. In particular, the way that Aric sourced ballet slippers for Evie and then she danced for him, reminded me of V.C. Andrews' Flowers in the Attic series. Lots of seduction via ballet. It was sexy and creepy and I really wasn't sure where it was going to go. One of Evie's powers is seduction and she waffled around using it, understandably. There was a bit less action, but that was because Evie was working out The Game. It was much more internal.

In terms of the love-triangle, I liked that Evie (mostly) pulled back from Aric to give Jack a chance. She seemed to shake off the fog to do that, and recalled what she had promised Jack WAY BACK at the beginning of the book. Hard to do, but necessary. The little note about Evie reading The Odyssey and connecting to the lotus-eaters was subtle but appreciated.

Quick note on Lark: of course I loved her.

The final scenes were crazy-good. I might have yelled and cheered. I cannot wait for book three. For now, I'm prepping a reread since Matthew's comments never make sense but are EXCELLENT when you know what the heck he's talking about.